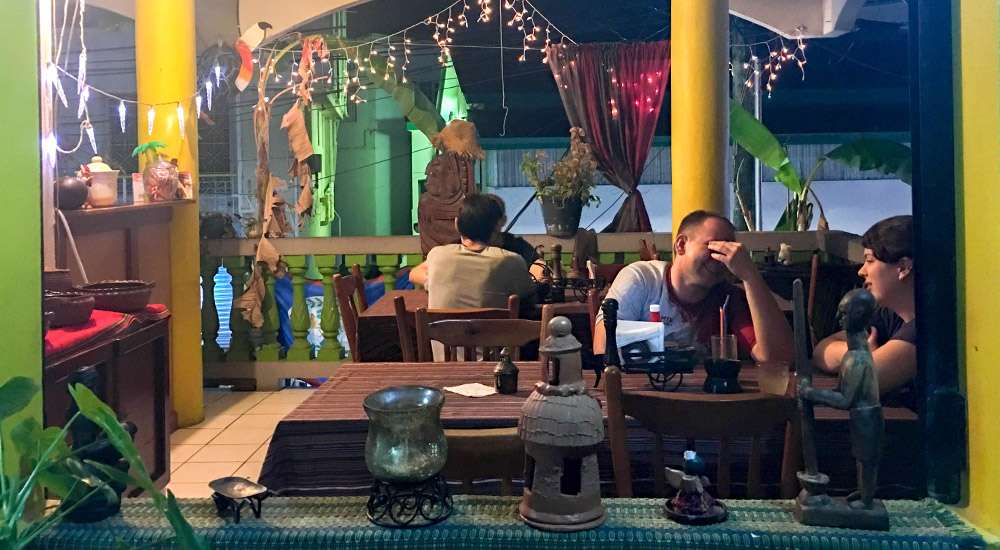 Good Bang for Your Buck?

Would I Go Back?

So, I’m really torn about this place. It’s one of those “hidden gems” that you really want to support, but there are a number of issues that I have with the place that make me want to move on and try other places instead.

Authentic Flavors is a tiny restaurant that seats about 20-25 people tops (the night we went, only half the place was being seated, which meant about 12 people at a time). If you’re hunting for the spot, look up for their sign as they’re on the second floor. We were desperately searching for a dinner spot on Christmas, and the only places we could find open were what I would call super-touristy places: bar/restaurants with no real personality and with mediocre food at best. When we hit upon Authentic Flavors, we thought we’d hit the jackpot.

The menu starts with a page that describes their mission, which is wonderfully down-to-earth and ethnic:

Their decor and tiny size made you feel like you were in a Belizean grandma’s kitchen. Coupled with the description in the menu, our mouths were officially watering. 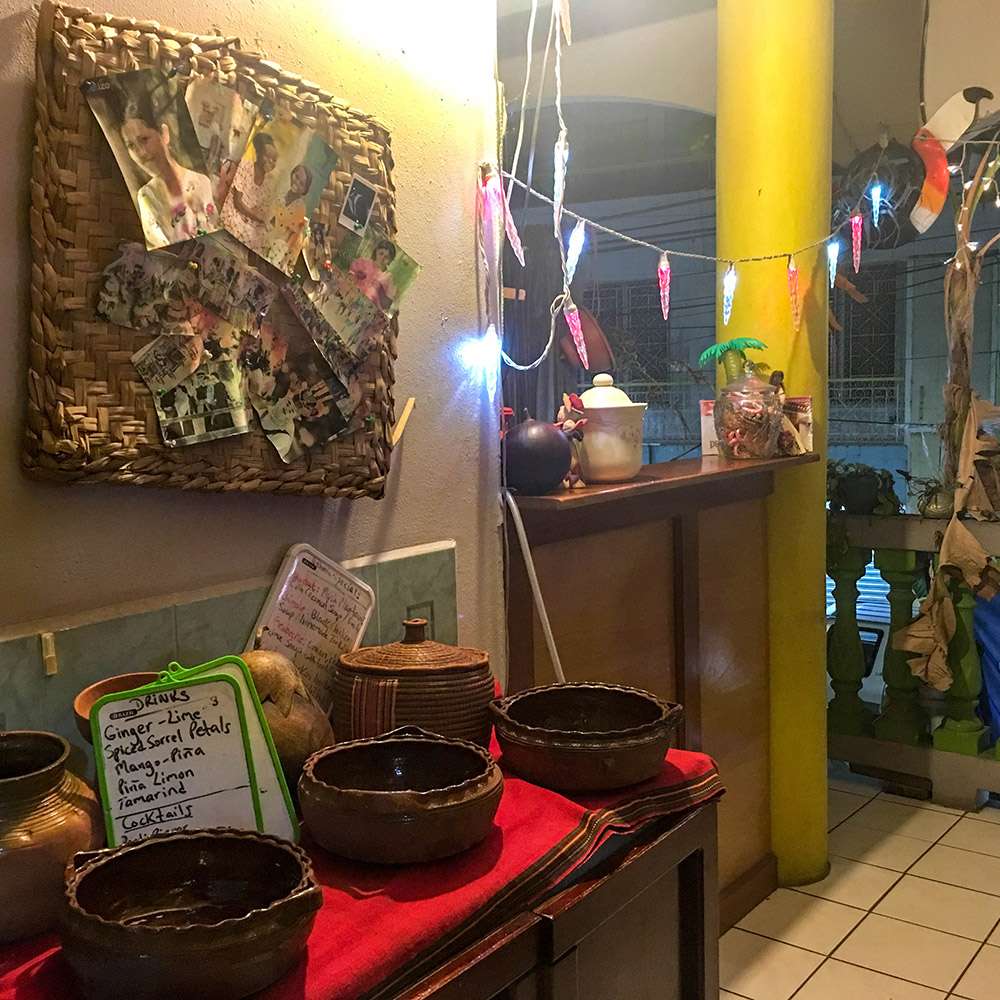 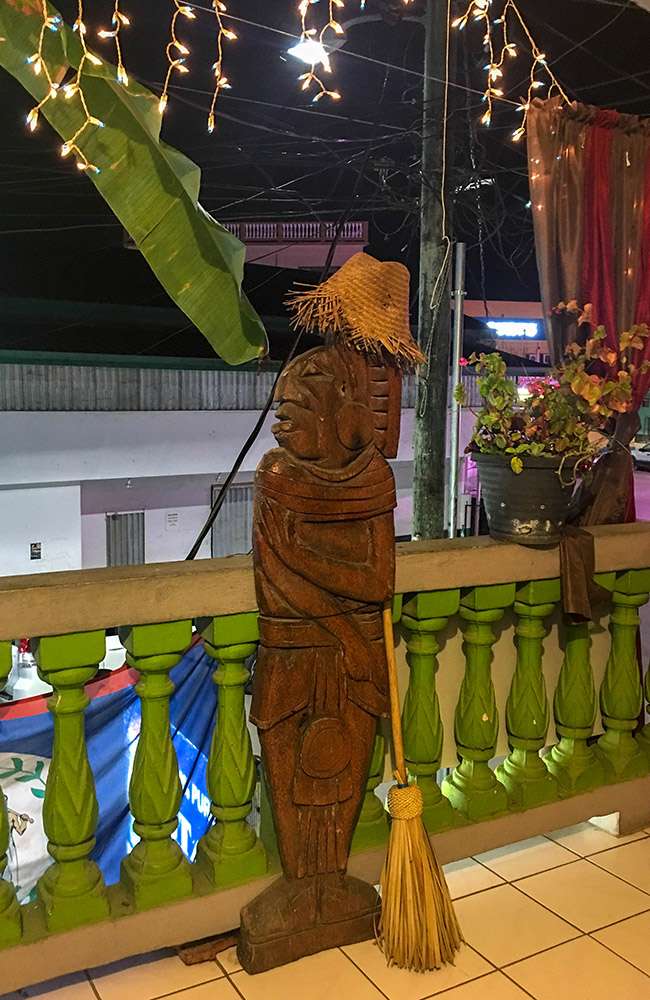 But then things started going downhill…

There were only a couple people seated at the time, so we didn’t have long to wait for our drinks. They have a list of wonderful-sounding homemade drinks (with or without alcohol), so I tried the non-alcoholic Lemon Ginger. It was on the sweet side for me, but was great after I’d watered it down a bit. Alex ordered the Spiced Sorrel Petals with rum in it. Being only an occasional drinker, he’s a bit of a lightweight, but after having sucked his drink down, he neither tasted nor felt the alcohol at all. (I am allergic to alcohol and super sensitive to any traces of it, and even I couldn’t taste any.) Hmm… Strike 1.

So onto the food…

The food took a while, but we were relaxed and on vacation, so didn’t mind, although we were getting pretty hungry. When the food finally appeared, the portions looked to be a little on the small side, but still pretty filling.

The shrimp curry was nicely flavorful, but was quite a disappointment when we found only 6 really small shrimp in the dish and, as one TripAdvisor reviewer put it, “you needed a magnifying glass to find the shrimp.”

The fish dish was fresh, healthy, and more filling, but was slightly bland so didn’t knock my socks off.

All in all, a slightly unsatisfying meal. Strike 2.

On the other hand, friend Nic had ordered the Pibil Burger (slow-cooked pork), for which he sang extremely high praise, and even exclaimed that he would return the following day to have it again. Excited to hear this verdict, I ordered one to try. By this time, the restaurant had filled up to a whopping 10 people or so, and I was therefore told I’d have to wait about 45 minutes to get my burger because I had already eaten and they were going to serve the others first. Strike 3.

Look, I get that this is a mom & pop establishment with one server and one cook, but hellooooo! There were about 10 people there, with us being 3 of them! 45 minutes? I didn’t bitch because I wanted others to eat as well (and felt bad that they were waiting at least 30 minutes for their own orders, given the “mad rush”), but I canceled my order as I wasn’t about to make our group wait almost an hour just for a burger.

So now I’ll never know how good that burger could have been. Would I go back? Yes – just to try that elusive burger. But if I do go again, I will make sure that (1) I’m not hungry to begin with, and (2) I go around 5pm before the mad rush hits, or (3) I’ve got all night to hang out.

I like to support small/local businesses as much as possible, but I can’t condone an inefficiently-run business of any size. I don’t know if Authentic Flavors was newly opened and experiencing growing pains (which would be the only acceptable excuse to me), but for their sake, I hope they learn to operate a restaurant more efficiently. There’s so much potential there, but not yet fully realized – perhaps more of a diamond still in the rough than a hidden gem.