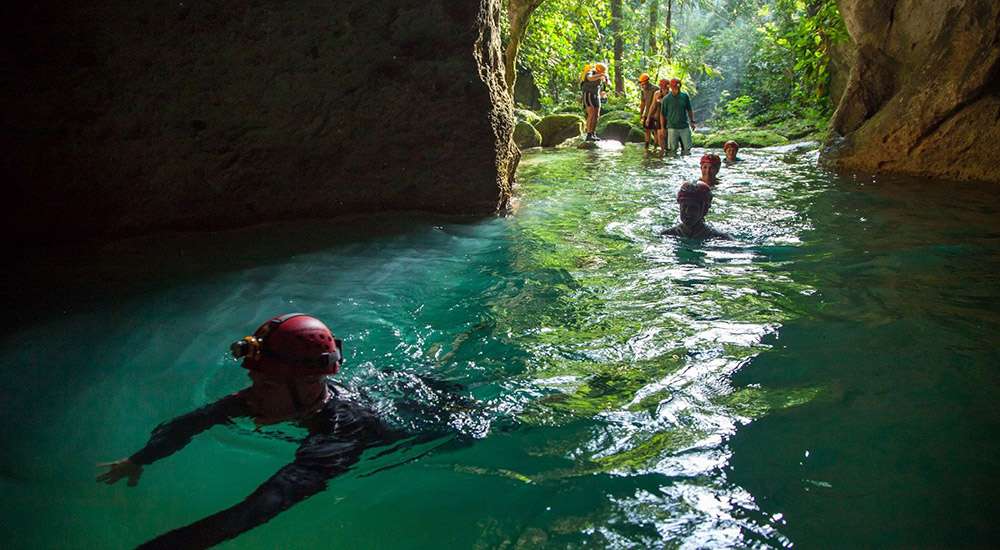 This tour is probably the closest that most of us will ever come to (safely) living out our Indiana Jones or Lara Croft dreams. If that sounds exciting to you, read on!

Actun Tunichil Muknal (ATM) is one of Belize’s most famous caves and Maya archaeological sites. Translating to “Cave of the Stone Sepulchre,” it is home to numerous Maya artifacts as well as the famous Crystal Maiden skeleton.

This is a pretty physical adventure that includes a few miles of walking as well as swimming and wading through both above-ground and cave rivers. It also requires climbing up and down a somewhat rickety ladder, scrambling over rocks, and fitting through a few tight spaces – all in the dark with just your headlamp for light. This tour is not for everyone, especially if you suffer from nycto or claustrophobia or any physical disabilities that would prevent you from walking, swimming, or climbing.

I realize “fitness levels” is a relative concept, but I’d say you’d be quite comfortable with this tour if you’re someone who exercises regularly at least a couple times a week. If you’re not in the best shape and fear that this tour may be too much for you, but can walk a couple miles and do some light scrambling over rocks, I would recommend what I consider the little brother alternative to ATM called Crystal Cave, which I’ve reviewed in detail here.

Below is a general description of the ATM tour followed by tips on what to wear and bring with you. Note that these pics are not my own since all recording devices are banned on the tour. (The story is that in 2012 a tourist dropped a camera, breaking a thousand-year-old human skull. The alternate story that I heard from a local was something related to rivalries and jealousy among tour companies, leading to some kind of sabotage. ¯_(ツ)_/¯ ) Regardless, the result is that cameras, phones, GoPros, etc. must be left back in the parking lot before you start the hike.

Getting to the Cave Entrance

The hike is more of a casual nature walk; however, there are several river crossings involved, and one or two crossings are wide and deep enough that ropes have been set up to allow you to pull yourself along. Our trip with Mayawalk Tours required us to wear life vests, so floating in the water and pulling yourself across isn’t too difficult to do. Of course, if you wish, you can show off your Ironman skills and swim across yourself. There will be a chance for a bathroom break before the cave entrance, but if I remember correctly, it’s a “natural” bathroom break so pray you don’t have to go #2!

Once you arrive at the cave, you’re plunging right back into the water. As you make your way deeper into the cave, you’re wading/swimming through sometimes neck-high water in dark spaces with just your headlamp to light the way. You’ll be in and out of the water, so expect to be wet the whole time. I did the tour in December, and the water was “refreshing” but it wasn’t to the point where I was shivering uncontrollably.

At some point as you near the main cavern, you’ll have to abandon your shoes, which will be stored in a nook somewhere nearby. The main cavern itself is quite enormous and dry, and only stockinged feet are allowed in order to help preserve the artifacts and bones which are strewn all over the floor. There is a clear path to follow, so stay on it if you don’t want to be the next bonehead to break a priceless artifact or get yelled at by your guide. If you forget socks, you can go barefoot, but let me tell you – you’re walking on the rough surface of the cave floor, so unless you’ve got calloused soles, even walking in socks is not that comfy in there, and going barefoot means your feet will just feel that much more tender.

The main artifacts that you will see are broken pottery and you’ll also come face to face with human remains. Why these particular items? Here’s a quick primer to answer that.

The Maya believed the universe consisted of three realms: the sky (kan), the earth (kab), and the underworld (xibalba).

Xibalba (aka “realm of fright”) was where the death gods ruled, and caves were seen as entrances to the underworld. Priests conducted religious rituals and sacrifices in these sacred caves, appealing to or appeasing the death gods as needed.

The Maya believed that all things, natural and manmade, had a spirit, and one way that offerings could be made to the gods was to break pottery brought into the cave for the purpose of releasing that spirit. This explains why most of the pottery found in the caves are broken or have a hole drilled into them.

If pottery spirits and minor blood sacrifice didn’t do the trick, human sacrifice was the ultimate option. Scientists believe that there was a serious drought back in 800 – 1000 AD, which wiped out a significant part of the Maya population. It is believed that in desperation, they used human sacrifice to try to appeal to the gods during this time.

As a result, you will find the ATM cave littered with small bones, an occasional skull, and the highlight of the tour: the Crystal Maiden. Note that in order to get to the corner where the Crystal Maiden lies, you will have to climb up and down a somewhat rickety ladder. While the ladder seems safe and strong, you’re not clipped into any safety lines, so be sure to watch each step.

While other skeletons have been found in the cave, the Crystal Maiden is the one that is featured on the ATM tour. With two of its vertebrae broken and skull intact, the skeleton does not show signs of the typical sacrificial method of blunt force trauma to the head, but suggests some other violent death – one theory being that the heart may have been ripped out. Some scientists also believe that the skeleton may actually be that of a male, but since further research cannot be done with disturbing the remains, the legend of the Maiden lives on.

Upon viewing this fascinating finale, you will make your way back to the cave entrance and hike back to the parking lot. There are changing stations and covered picnic benches where you will be given time to change and eat the basic lunch that the tour company will provide.

All in all, the physical aspect of the tour coupled with the amazing artifacts and human remains made this my favorite adventure in Belize. Our guide, Aaron, was humorous and knowledgeable of Maya lore, and while I didn’t find the physical activity that challenging, it was exciting because, come on… how often do you get to swim or wade around through cave rivers in the dark?

The ATM tour, however, does have its disadvantages. Its popularity means that during the high season, you are one of many tourists being herded through the cave like cows. Tour group after tour group follows the same route within the cave, literally minutes apart. This means there is no time to stop and browse at your leisure or to ask many questions, and in general you just have to keep up so that you’re not slowing down your group or you’ll feel the next group nipping at your heels. Again, recording of any kind is not permitted, so you have no memories to take home other than what’s in your head. Side note: some tour companies will offer early morning private tours to beat the rush, so if you’re willing to pay a premium, make inquiries.

Despite these downsides, I still think the ATM tour is worth doing once. However, if you’re a caving fan and want a chance to slow down and observe at your leisure, I would also recommend doing the Crystal Cave tour for a chance to explore an off-the-beaten-path cave that still offers great natural formations, some pottery, and human remains. It just won’t be as grand as ATM and you won’t find a full skeleton there, but you also won’t find any crowds.