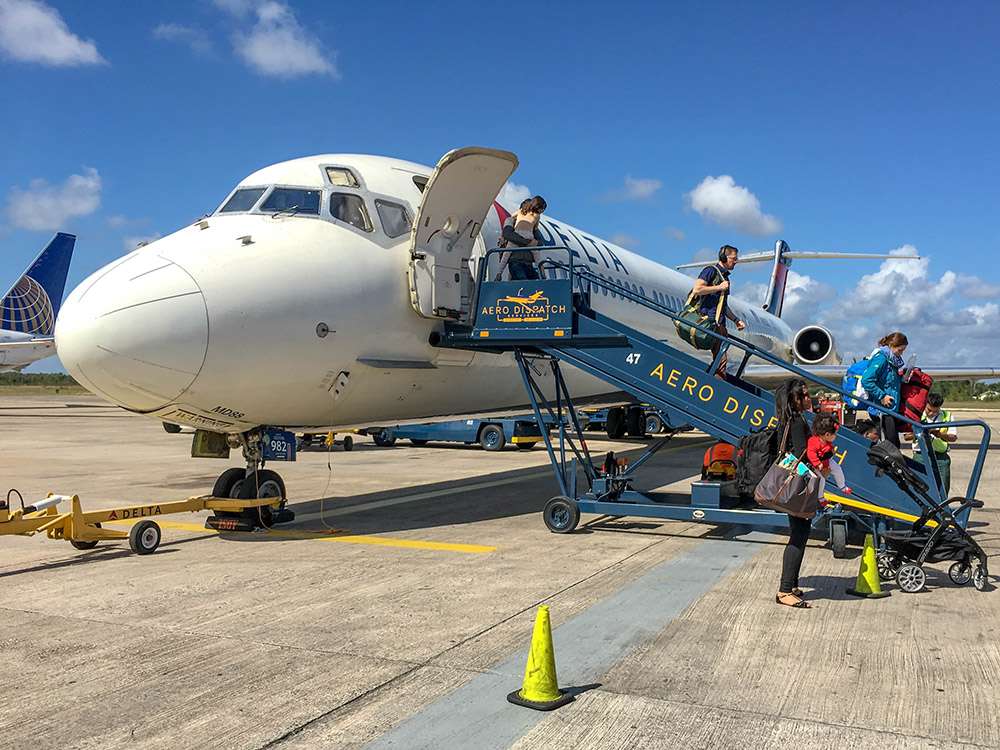 Until our 2017/18 Belize trip, we had never had a missed flight, train, boat, or car on any of our trips. Indeed, the Vacation Gods had smiled down on us for four years…until they didn’t.

Our trip was to start with a simple flight from Las Vegas to Los Angeles, and then a direct flight to Belize a few hours later. The Vacation Gods decided this wasn’t meant to be.

Our first flight was delayed just long enough so that when we arrived in LA, we were told we couldn’t make our connecting flight to Belize because we had just missed the final time to check in our bags – by minutes. By now it was just past midnight.

Me: But the flight isn’t taking off for another 40 minutes! Isn’t that enough time to still check in the bags and get to the gate?

Airline guy: Nope. Too late. They cut off the baggage time. We can book you on the next available flight, which is at 4:25 this afternoon, but it goes through Atlanta where you’ll have to spend the night before catching your last flight to Belize.

That’s 2 nights in the US that should have been spent in San Pedro, Belize. Suck. But what can we do? Nothing. We sighed, picked up our bags, and found a hotel in LA for the night. Later that day, we boarded our flight to Atlanta, arrived at midnight, checked into another hotel, rinse and repeat.

The next day, despite all the flight muck-ups and wasted time in hotels, we were excited to board the last leg of our flight to Belize. I got on board, and this was my view:

Oh come on now! As “last minute” passengers due to the schedule change, our seats had been assigned to us. We were stuck with them. Okay, look, it’s not like I’m going to look out the window the entire time, but since I’m not rich enough to own a drone, I was hoping to catch a glimpse of Belize as we landed and perhaps get some in-air photos. Mentally, I shook my fist at the Vacation Gods.

So we finally landed in Belize, made it through immigration and then got to customs. Last obstacle in our way to starting our trip! And the damn customs officer confiscates our sealed packs of tuna.

“What? Why are you even carrying around tuna?” you may ask. If you are, then you’re missing the point, but there is a reason for that: we like our proteins, and past vacations in developing countries have taught us that a lot of meals come fried with very little protein, so we like to bring a few cans of tuna/chicken with us to supplement our meals. More on our Good Eats Philosophy here.

This time, we wanted to go more lightweight, and in addition to a few cans of tuna and chicken, we packed a few of those vacuum sealed packs of tuna that come in the form of a bag. This was apparently too fancy to escape the attention of the customs officer. We were told that bringing in those packs amounted to illegally importing fish although he apparently had no issues with us importing cans of tuna.

As suspected, later visits to local markets in Belize revealed a ton of canned tuna being sold, but no fancy vacuum-sealed packs. I have no doubt that our fancy packs of tuna ended up in the customs officer’s house that night. That thought pissed me off. If he had been curious about the packs and asked about them, I would have gladly given him one to take home. Instead he confiscated them with a flimsy excuse, and he knew there was nothing we could do about it. He sent us on our way with our canned tuna in hand as a consolation prize.

I suppose I should be glad that he at least didn’t take our canned tuna, and I know it wasn’t a huge loss, but the principle of it just irked me. And with the flights getting jacked up, two nights in hotels, and two days of vacation lost, including the chance to snorkel with sharks and rays, I had to once again raise my fist and shake it vigorously at the Vacation Gods. First world problems, I know, but dag nabbit! I’m on vacation!

Fortunately, the rest of the trip passed with only one very minor mishap, and if we hadn’t been stuck in LA overnight near the airport, we wouldn’t have discovered this little gem of a Greek restaurant. All in all, we were able to come back with many great memories to share with you, so please feel free to read on to the good stuff! I suggest starting on our Belize: A 13-Day Itinerary post to get a general overview.